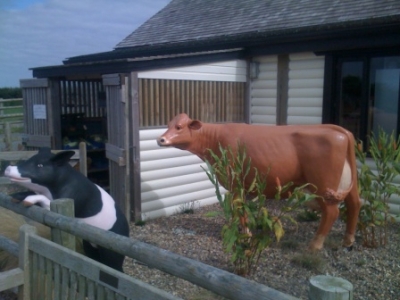 This series of images shows us at Carruan farm in Polzeath, Cornwall. Duncan Bannatyne advised the owners that they need Lifesize Models at the entrance to their attraction and throughout the Farm to enhance the look and interest to the attraction. It certainly worked with Friesian Cows placed at the entrance every car passing could not help but look, and when we opened the doors of the van in front of the Farm Shop the crowds of children just fell in love with all our Animal Models! No sooner than we unloaded the models the children were climbing all over them having their pictures taken by their family.

This image shows one of our many Lifesize Cows that we supply, this one was finished in a South Devon Colour by our Artist Lee Jones and his understudy Hollie Sims.