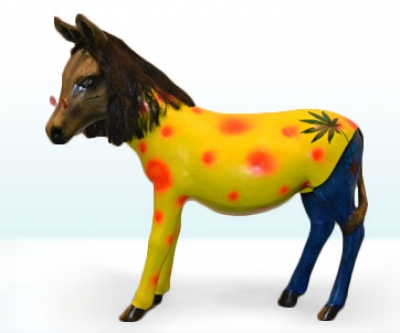 The Guernsey Adult Literacy Project (GALP) is a local charity which relies on sponsorship and fund-raising activities to cover its annual running costs. Over the past few years it has organised several fund-raising events; these include themed film nights, the Guernsey Variety Shows, the Giant Quiz Book and, last summer, the very successful Duck Race!

Its latest fundraiser is The Guernsey Donkey Parade!

The concept is based on other parades which have been held around the world such as Cow Parades, Pig Parades and, last year in London, the Elephant Parade.

When deciding on what kind of animal to use for such an event in Guernsey it was obvious that ‘our’ parade should be based on the Donkey - proud, stubborn & fiercely independent!

Forty, life-size, fibre-glass donkeys will arrive here in early April when they will be handed over to local artists, designers and community groups who will decorate them. At the start of July they will go ‘on parade’ at locations around the island. A map, available from the Information Centre and hotels, will be available indicating their locations. They will remain in their positions until mid-September when they will be auctioned, all proceeds going to GALP.

Each donkey has been sponsored by a local company and the sponsors will choose the name for ‘their’ donkey. All the donkeys will be fitted to plinths to which will be fixed plaques detailing the name of the sponsor and the designer/painter.